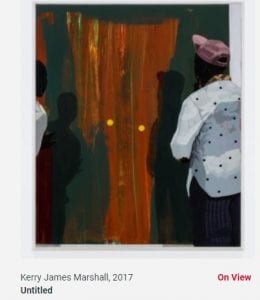 After looking at a few pages of the collection this is the image that got and kept my attention the most. One things that I liked about this image is the colors that are in the middle because to me they reminded of fall time in Georgia with all the leaves changing colors. Another thing that I liked is the two yellow dots in the middle of the photo because to me those two dots stood out the most and after looking at it for a while I imagined those dots being the eyes of a fox which is one of my favorite animals. Another things that I liked is that you could see the shadows of the two men that are standing there when I saw this for some reason it made me think as if they were in a different dimension or if their spirit was somewhere else something like that. Going along with the last thing I feel like in the middle the way it is painted it makes it look like a door which helps with making it seem as if they are going somewhere else. Overall I feel like that with this photo it means or it represent different things to different people which I liked and I like how if you look closely to the person on the right it seems like if he has his hand to his chin as if he was thinking trying to figure out what the painting is. Usually I don’t like creations that are in collections that don’t have a title but with this one that was not the case because I believe that with it being untitled it helps with the viewer interpreting it like they want to which I also liked. 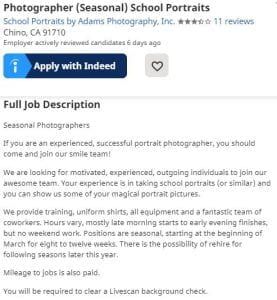 This job was the first one to get my attention because after reading the title of the job I thought it could be fun to do this. This job is in Chino, California and its to go to different school and take portraits which even though I am not that great at portraits I believe I could get better at it. The reason I would be interested in this job is because I could be a part of the team that take s portraits of students their senior year. I liked the idea of being the one taking the photos of seniors to remember their last year of high school since I believe it is important. The pay for this job isn’t bad and you could get paid for the miles that you drive for the location of work depending on where you need to go take the portraits at. There doesn’t seem to be any requirements besides those that deal with covid like taking screenings and it says that they will train you, provide uniforms and all the equipment which seems fantastic to me 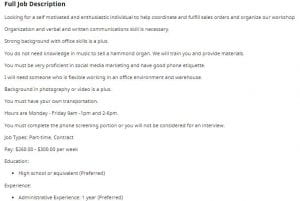 This is the second job that got my attention and it is to be a personal assistant. The things that mostly got my attention is the salary and the qualifications. It says that the salary is $260-$300 a week which is really good and there aren’t a lot of qualifications. The qualifications that it has listed is a high school or equivalent and a year of administrative experience but the second one  is preferred so it is not a requirement. What I also really like is that in the description it said they will train you and provide the necessary materials so I wouldn’t need to get the things my self and if I didn’t know how to do something then they will teach me. The only thing that I don’t like about this job is that it seems like a contract would have to be singed for this job which I don’t feel comfortable with but other than that I would go for this job because I believe it could be interesting and fun to do this job. 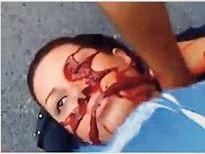 The name of this piece is “The Death of Neda” which was taken on June 20, 2009. The photographer of this art piece is unknown unlike the other pieces that are in the 100 Most Influential List. The full name of this woman is Neda Agha-Soltan she was 26 years old when she was shot after stepping out of her car on a Tehran street near where Iranians were massing in protest of what was seen as the farcical re-election of President Mahmoud Ahmadinejad. The reason that this specific one got my attention is because of how the majority of the other ones that were on the list were in black and white. This one has bright colors just because of the blue of the woman’s shirt stands out from the gray of the street and then the red from her blood stands out the most.

This image had the greatest impact compared to the other ones because when I saw this image and then also when I read the summary of it there where a lot of things that came to my mind. The first thing that came to mind when I saw this is that this image is something that can be seen in crime shows where they solve murders. The second thing is that it just seemed like a very painful death and after reading what happened there were a few different ways that I felt. I felt sad because of how she was a innocent bystander and she got killed when she had just stepped out of the car and what got me more is that they don’t even know who fired the shot that killed her so her family doesn’t even know who is responsible. Another thing is that when I read how she hadn’t done anything but she was killed I thought of George Floyd’s murder and how many people got upset after it happened and how it seemed like he wasn’t going to get justice so those same feelings where coming up again. This image is really influential because it can bring many different emotions to people when they see it.

Read and Reflect: Why Is Photography So Important

There are many reason why photography is so important such as it allows you to collect meaningful moments that happened in your life, it is a good hobby, it inspires you to travel, etc. The first reason as to why it is important is because you can take your phone and start taking pictures so that you have them forever. For example, for my brothers wedding the guests can take out their phones to take photos during the even with people so that they can remember that special day. Another reason is because it is a good hobby that you can do where you can continuously learn new things. I love doing photography as a hobby because it allows me to have fun with my surroundings along with other people while taking photos. What is good about photography is that it motivates you to go on adventures to new places so that you can have different surroundings when taking photos.

Not only can photography be used for personal reasons or viewing but also for public ones. It could be used to make people aware of climate change that is happening. By going out to places where the effects of climate change can be seen taking photos of that and posting them to a popular platform you can make people become aware of how bad the situation really is. Photos are extremely important because they can become history. What I mean about this is that photos that are taken from big important events in history can be used later on to see how things where during that time. For example there are many photographs that were taken during World War I which we now look at to help us get a better understanding of what was going on during that time and how things were for people. There are many different things that photography can be used for which is why it is such an important thing to have.

Why You Should Become a Professional Photographer

There are many reason as to why being a professional photographer is a great job. Some of the reasons is that it is accessible, it’s current, you will be your own boss, you will be free of restrictions, etc. Photography  is highly assessable which means that you can easily get the materials that you need in order to take photos. Since it is current then that means there is a lot of business from people wanting you to take photos of them to post on social media, for magazines, or just for them to remember a special moment. Whatever the case is there are always photos waiting to be taken. One of the best reasons why this is a great job is because you are your own boss and your are free of restrictions. With this career you can make your own schedule so you can chose what days you want to work and how many hours without being forced to work when you do not want to work. Something else that is great is that there is a infinite number of things that you can take a picture and you can add your own personal touch to the photos weather with what you include in the photo, how you take the photo, or by the way you edit it the photos will be unique to you. A plus of this is that you don’t know how to express the way you are feeling using words the photos you take can help you express these emotions. Overall being a professional photographer is an amazing career because there is so much freedom with it but if you don’t want it as a job you can also just have it as a hobby which is great. 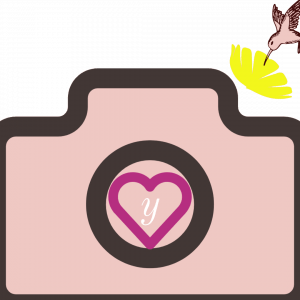